So for anyone who was wondering why I was videoing the Golden Gumboot and an ABC van was visiting Tully yesterday here’s the low down.

Yesterday I was out and about collecting footage for a digital story of my Yasi cyclone experience.  I had to match pictures to the story I had just told on camera.   Whilst the cyclone is over I could find pictures to match my story like landmarks of Tully! I learnt about preparing for interviews versus spontaneous interviews with open questions.  Mick shared a bit about vox popping (same question to ten people) versus a few questions to one person.

Mick Bromage,  one of the ABC open producers for NQ,  spent time teaching me how to frame an image and how long to film a still scene for a video editor to be happy with you (10 seconds! is the key).  We talked about the thirds in a camera image, and triangles and circles.  Then I was able to observe and hopefully model some of techniques of filming that Mick had just taught me.

I got a sneak preview of a very moving digital story from an ‘insider’ in the South Queensland Floods.  Very soon Carolyn Bofinger, myself, and some people from Cardwell and other places will have our Yasi stories featured on a special website for ABC open. I’ll let you know when it goes to air.

As for me, I have had the  honour to be asked to be North Queensland’s guest blogger for Aftermath an ABC open project.  ABC open are giving me some training to bring stories of recovery and resilience to you via text,  photos, podcast and video.  I might even interview you, ask you for a photograph or come and cover the reopening of your business as exciting news for the area.   I am not working for the ABC, but I am a guest in their website space and helping them bring regional stories as an insider of the Cassowary Coast and North Queensland to our wider Australian community.   I hope I do Cassowary Coast proud.

It was a bit nervewracking being on camera but now I can go to my favourite spot –  behind the camera  – and tell stories  in the media I enjoy, writing/blogging/photography and now video!!  I promise to be a very kind interviewer!   I really enjoyed observing and practicing the patience of being a camera woman.  I did some fun things like safely taking pictures of the railway tracks and standing in the Tully St and filming our main street.

So far it has been a truly inspiring experience and who knows what will happen at the end of the gig (which goes for around 6 months).  All I know is digital storytelling totally rocks!  You can do it with some very basic equipment with a few simple tips from the pros.  My next gig, filming dear Carolyn’s farewell, which she likes to call a ‘see you soon.’ 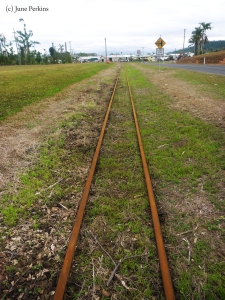