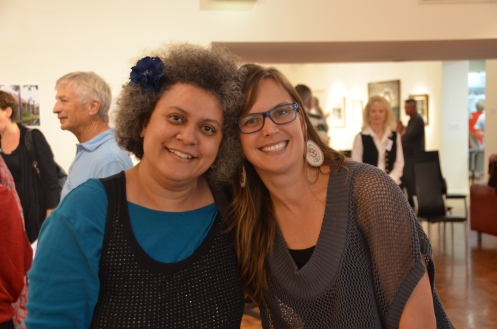 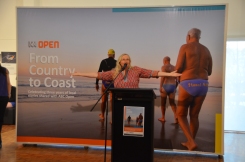 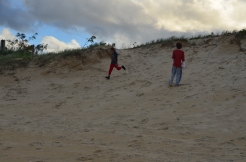 Enjoying the dunes at Castaway

The weekend was full of sparks – from nature and events – for stories and poems.  It was a time for reconnecting with ABC Open.

I met Jo Joyce  (producer for the South Coast) in person for the first time.  I had worked with her ‘virtually’ for ABC Open when editing with the 500 words project and had viewed  her stories, photographs and videos. The local producers from my old home area who I was mentored by were: Mick Bromage, Leandro Palacio (now in Tassie), and Suzy (retired), but ABC Open feels like a family and it’s very cool  meeting more producer sisters and brothers, and keen ABC Open contributors.  We all love ABC Open.

The family headed up to Noosa to check out the From Country to Coast exhibition which Jo had put together.  It consisted of local contributors work from  various ABC Open projects, particularly Now and Then, but with samples of others like photography challenges and 500 words.  The excited buzz of contributors with their families and friends, and the public who had come along to support them, filled the exhibition space.

Jo introduced me to quite a few of them, and some introduced themselves.   They’re a friendly bunch!  They told me which were their contributions.  An ABC reporter was taking photographs of each artist next to their works!

ABC Open has been building momentum since it began in 2010.  More and more locals are building a relationship with the producers, their town and other contributors.  Contributors, who are from regional communities, share a passion for their home, photography, writing, storytelling, video, documentary making,  and where they may have had limited skills to begin with, they grow in confidence and take more risks than when they began.  They discover more about their camera, themselves and their community.

The exhibition is still on for anyone heading to Noosa, just go check it  out  at the Noosa Regional Gallery in Pelican St.  Allow some extra time if you want to watch the video selections as well.

It was the first time I had been to Noosa in over 19 years, and I didn’t remember much about the place.  It reminded me of Port Douglas and Cairns in its shop fronts and road winding by the coastline. One way it was massively different was the crowds, which were enormous, partly due to a food festival but also because Noosa has a beautiful beach and it’s still not full winter yet.

We tried to go and visit the National Park and local beach but there were absolutely no parking spots for kilometres.  So we ended up going to a beach called Castaway, which had sand dunes and windsurfers and less than 20 people.

I loved feeling the sand and the wind (which was giving the wind surfers lots of  blissful flight) – and watching my youngest son have a great run up and down the sand dunes with his older brother.

David was a bit concerned about how long  it took us to find the main highway again, only because it might mean travelling 60 km an hour for the 120 kms we still had to make home.  Not to worry we made it back to the main highway with sand in our toes and the memory of wind singing in our ears.  We made it home to Brisbane metropolis, or as some like to call it Brisvegas.

One thought on “Country to Coast, Dunes to Highway”