Yesterday I read the following from David Attenborough:

“Where in 1945 it was thought that the way to solve the problem was to create wildlife parks and nature reserves, that is no longer an option. They are not enough now. The whole countryside should be available for wildlife. The suburban garden, roadside verges … all must be used.”

I agree.  We have bush turkeys, ibis, crows, and cockatoos frequent our back yard.  They enrich our lives.

The down side is that we can’t start a vegetable patch outside because of the bush turkeys digging holes everywhere. However  the upside is that they love eating all our scraps and it’s kind of cool they  are protected and have the run of the neighbourhoods. We are going to start a vegetable patch on the veranda.   I’d love to attract more butterflies to the backyard, perhaps because I miss the beauties we had in Feluga and Murray Upper.

I was thrilled this week to discover an interesting and attractive new plant not far from home. In my ecology quest I’m making a point to find out the names of unknown plants and animals. Today I present to you the Bat Wing Coral Tree – and here is a photograph where it does look like a bat wing!  A friend who lives in Mission Beach, but who knows heaps about the natural world, helped me identify it from a photograph I posted. 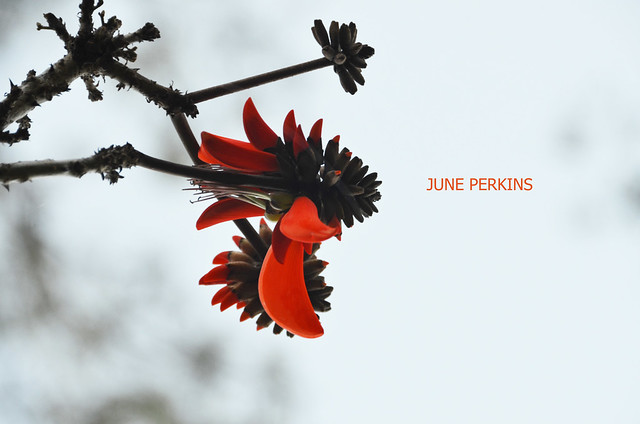 I hope to use my ecology quests to develop my poetry and stories.  It will be fun  and empowering to look at things and be able to name them.

Whilst living in North Queensland I learnt a lot about the variety of  palms – which prior to living there I had a limited knowledge and interest in.  Being surrounded by them I could see so much variety, it became intriguing.

Returning to Brisbane after an eight year absence I am determined to know more about the more obscure looking plants in the garden, parks and streets.

Postscript – A friend has suggested that I can create raised vegetable patches and bush turkeys won’t touch the vegies. Looking into this and may post the garden in process.  Spring is in the air.