Today’s writing guest is Megan Higginson who loves to write and illustrate stories of monsters, aliens, and mind-blowing places and asking questions like, ‘What if?’ She hopes her stories and illustrations will help readers to look at their life and the world around them with new eyes.

I have come to know Megan through the Duck Pond community, of Jen Storer and also through Creative Kids Tales. I was thrilled when she illustrated one of my poems for the Creative Kid Tales Story Collection 2.   I am delighted to have her as a special guest on my blog.

1) What motivates you to write? What keeps you writing?

I always have characters talking to me and wanting to go on adventures. When I was a kid it took me until I was seven or eight to learn to read. After I learned to read, I was a total bookworm but never thought I was a writer as I have dyslexia and thought I was too stupid to write stories. In class I would write a story for a class assignment (primary and secondary) and it would be so different to everyone else’s I always thought I did something wrong. And the class usually ended up laughing at my story too. I realise that I just approached life differently and my stories where actually offbeat and funny.

As I child, sometimes, I would close the last page of a book and all these different characters would talk to me and we would go on adventures. I never told anyone as I thought I was nuts. For me it was another form of escapism. Yet, I’ve since found out that this is what writer’s do. In answer to your question, I have so many characters chatting to me about this adventure and that adventure they’d like to go on, I think I’ll be writing until the day I die and still have another story begging to be written.

2 a) You illustrate also? How long have you been doing that for? How do you prepare for your illustrating jobs?

In 2017 I joined the 52 Week Illustration Challenge at the encouragement of Giuseppe Poli. In fact, you can read about my journey to this point in a blog post, How I Overcame My Fears and Dived into the World of Illustration.  At that stage it was about practicing and learning about illustration, so I also took Nina Rycroft’s inaugural Illustration eCourse in 2017. I’m friends with an illustrator as well, so Ester de Boer has helped me immensely by giving me feedback on my art pieces, areas to improve, and different exercises to enable to me to get better. I’m a member of Creative Kids Tales. Therefore, when Vol.2 of The Creative Kids Tales Story Collection was announced, I decided I was ready to put myself out there as an illustrator. All nine of my illustrations were accepted and now published in the collection available now, including one I did for your poem.

For the collection I read over the story and then I pretty much just dumped whatever came to mind onto the page. Lots of really scribbly pictures, and half-formed ideas. From there I weeded out what I thought would work and what didn’t. Then I moved onto planning the piece and getting it down onto the page in pencil, and gradually worked it up in layers of paint/pencil/ fine liner, whatever medium I’ve decided was best for that story, until I was happy. And then I finished them off in Photoshop. If I’m stuck on something and can see it’s not working, I ask Ester and she can always spot the little details that are problematic which I’ve missed. She always knows a work around. I fix it and then the picture pops.

I’m about to illustrate my first picture book and I’m doing the same sort of thing. However, in addition to my usual dumping, scribbling and refining the characters and composition, I will be mentored through the process of illustrating my first picture book by well-known illustrator Nina Rycroft, along with Ester de Boer. So, lots of support.

‘Raymund and the Fear Monster,’ was originally written for some children in a Philippine orphanage whom I’d met while on a mission trip in 2013. However, I realised it had broader appeal. About the same time, I started writing other stories and decided that this was what I wanted to do seriously. In 2015 I took a Writing Picture Book course with Cathie Tasker at the Australian Writer’s Centre. I tried to make ‘Raymund’ fit within the parameters of a picture book. I tried to shove it under 600 words. It was like trying to shove a huge fluffy pillow into a tiny box. It just didn’t work. I did come up with a shorter different version which is now published as Freya and the Fear Monster in the Creative Kids Tales Story Collection Vol 2. Things that Go Bump. Yet, I knew Raymund’s story still needed to be told. I kept reworking it. It kept popping out everywhere until I wanted to throw up on it, burn it, and never see it again.

In 2016 three things happened within a week. 1) I read Jen Storer’s blog post, Right Story, Wrong Format. Why it’s important to stay true to the story. I also attended my writer’s group where we did a dialogue workshop. I played around with some dialogue from Raymund and I finally didn’t want to throw up on it anymore. I actually felt excited about it again. And then I read a picture book about a dragon who ate children (I know. Weird right. Fun story though) and realised I had started the story in the wrong place. I went and rewrote Raymund and it was so much better. I submitted it to one publisher who I thought if anyone would take it, they would. They didn’t. Probably because it is waaaay over the current trend in word count and a rather niche topic. So, Ester and I decided to partner up and do it ourselves. Penny Springbrook at Bookcover Café helped me polish ‘Raymund’ and I am so happy with how the story ended up. 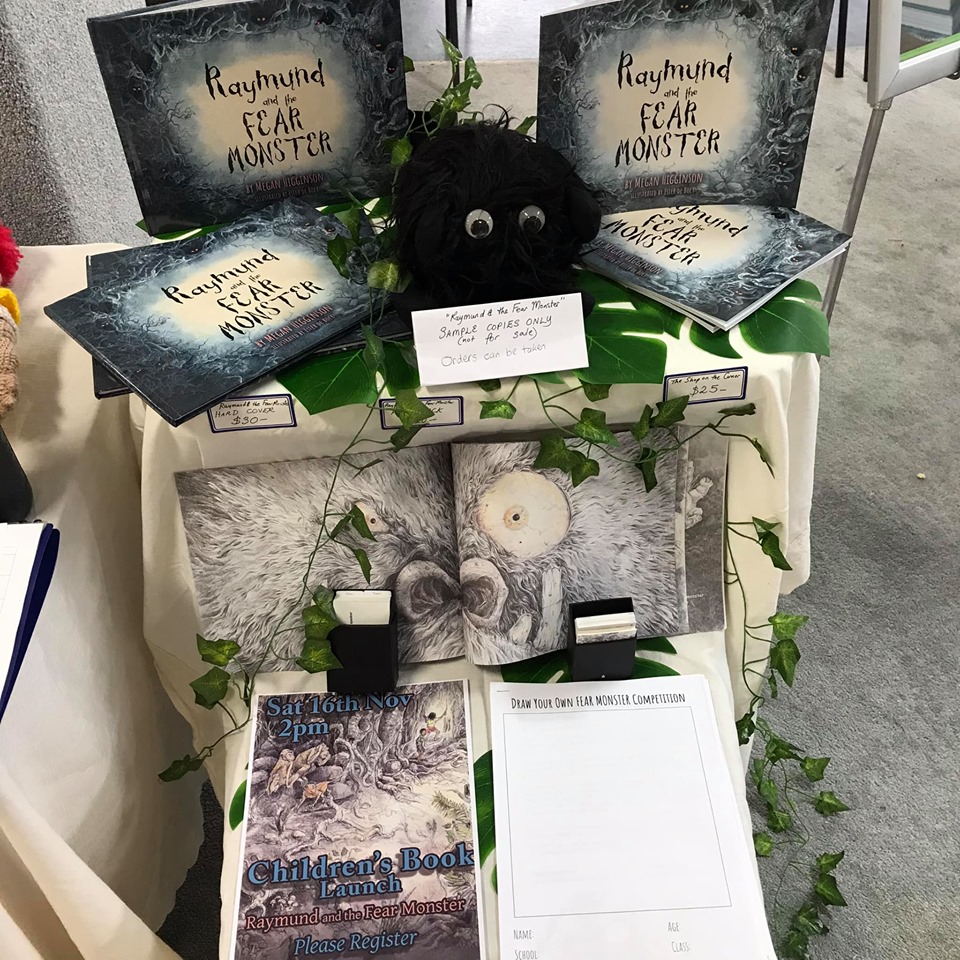 4) What have been the highlights of the journey?

I think watching my story come to life under the skilled hands and creative brain of my illustrator has been a major highlight. It’s a different style to what is normally used in picture books. However, when we’ve taken the illustrations and even the mock-up into schools, it’s been warmly received by the students and teachers. And that’s before it was published

5) What have been the challenges?

I think for me personally, has been the wait. We started this journey in late 2016 and it’s now 2019. Ester was busy illustrating other picture books she’d been contracted to at the time. She started planning December 2017 and began the illustrations in January 2018. However, having said that, I was happy to not be a pushy author and just leave her be and work at her own pace. Ester’s work is incredible and the amount of research she put in, and the details of her illustrations are amazing. I thought our book would look wonderful. But, not in my wildest dreams did I think it would look this incredible.

I think it’s also been a highlight, as well as a challenge working with a graphic designer. Ester and I had very clear ideas as to how we wanted our book to look and I’ve discovered it can be hard work putting a picture book together. However, it’s finished and it’s how we envisioned our book would look like. It’s a fun book.

6) What/Who are your major creative influences?

Illustration: As a child I loved the impressionist era (Of course, I didn’t know that it was called this at the time). As a child I loved the bush and was captivated by the artworks people like Tom Roberts, and how they captured the light of the Australian bush. I thought it was incredible and I always wanted to paint like that. I’m learning.

I didn’t know it as a child, but I loved Arthur Rackham’s illustrations. I would pour over his work for hours, studying his line work and detail and wishing I could draw like that. Tony DiTerlizzi is another one. I love his imagination and I love that he’s current and I can get online and see videos of him working on an illustration.

Aaron Pocock is another artist whose work I love. Hmmm. I’m sensing a theme. Fantasy. Anyway, Aaron is so versatile. He does cartoons, and huge gorgeous oil landscapes. However, it’s his fantasy artwork I adore. So, from him I endeavour to use colour well and think how to use colour to portray emotion. Ester de Boer’s work I admire. Her imagination is insane, as are her detailed line work. So, from her I’m learning to let my imagination run wild, to play and have fun, and to always add little details to my illustrations.

Thanks Megan for sharing your story!