So the absolute highlight of the Brisbane Writers Festival for me was the talk I attended by Trent Dalton.

I saw Trent a few weeks ago on Q and A, on the ABC, as well as Sofie Laguna, and was so impressed by the way they both conducted themselves on the panel I set out to look up their books.

When I heard Trent would be attending and presenting at the Brisbane writer’s festival he went right to the top of my must-attend sessions.

When Trent entered the room there were huge cheers.  He pumped the air with his fist, and yet there was no ego in that fist pump.  It was more like a boxer, who has triumphed over a huge battle in his life, and is now saying thank you to an appreciative crowd.  A Rocky moment, part of a montage.  He thanked us for choosing to attend his talk over the current game that was on at the Stadium.

Matthew Condon, another brilliant Brisbane writer, was interviewing him and it soon emerged that he had known Trent for fourteen years, when Trent began as a reporter, and that Trent saw Matthew as an inspiration for his writing.

Matthew is well known for his non fiction books about crime and corruption in Queensland, and is a brave, principled and ethical man.  It became increasingly apparent just why he was the right person in many ways to be sharing the stage and interviewing Trent.  He knew the stories of some of the criminal figures featured in the book by Trent.  Trent told Matthew he was writing a book, about a ‘young man raised by a gangster,’ and Matthew said, ‘I want to read that book.’

Before attending this talk, to be honest, I did not realise that 50% of the book is based on Trent’s true life experience.  But in his first work of ‘fiction,’ he has found a freedom to extend and develop and share his philosophies about the line between criminal (with a heart of kindness and compassion) versus truly evil.  Matthew joked, that so many authors even in fiction, channel their life without realising it.  Matthew’s mum always says to him no matter what he writes, ‘when are you going to stop writing about your Dad.’ 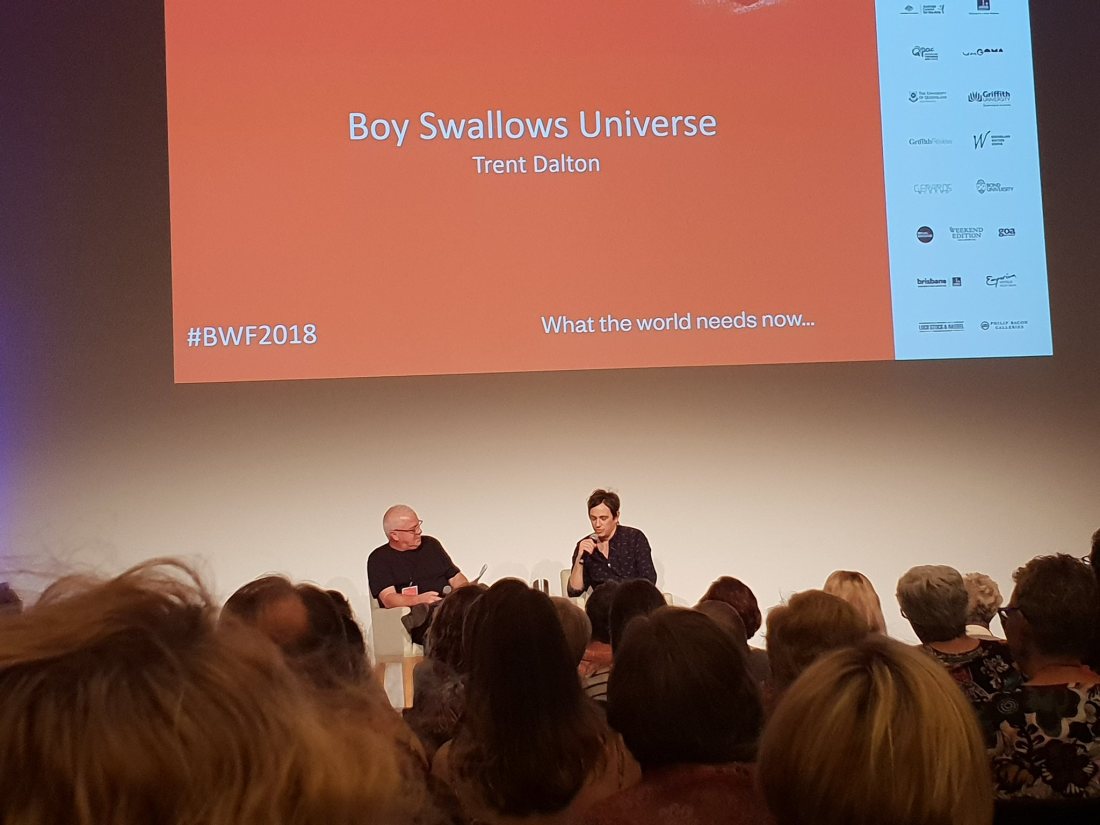 Trent shared that much of the story is based on real life figures, his mother, his three brothers, combined into one character August,  and the gangster who was his babysitter, who through a comment to his mother, ‘saved my mother’s life, when no one else would have anything to do with her.’

As Trent spoke, his great love and admiration for his mother and family was warmly conveyed, but also so were the challenges of his childhood, and how much his main character Eli is based on himself : the audience were often moved to tears.  This was tempered with moments of laughter as he saw the humour in the characters of his life, including his forever rebellious Dad.

Trent felt that his whole writing career in non fiction, pursuing stories about social justice, interviewing those struggling in life,  experiencing domestic violence, and more was in fact a journey  to understand the balance of good and evil in the world and what makes a good person turn bad, or a good person on a destructive path turn to a good one.  He was trying to ‘get the scoop’ on understanding his family through his reportage of families who were going through something similar.

Trent did some creative things like taking us through his life a museum and explaining his motivation for bringing the worlds of Darrah and Brackenridge, Brisbane into fiction.  He pointed out some of the heroes of those areas, and some of them were in the audience, and are still out in those areas, helping out young people who have terrible situations at home.  He passionately spoke of how he wanted to emulate Charles Dickens, and what he did for the children of London, in doing the same for the young people of Darra and Brackenridge.  But just like that fist pumping, there was absolute sincerity in what Trent was saying to us all. 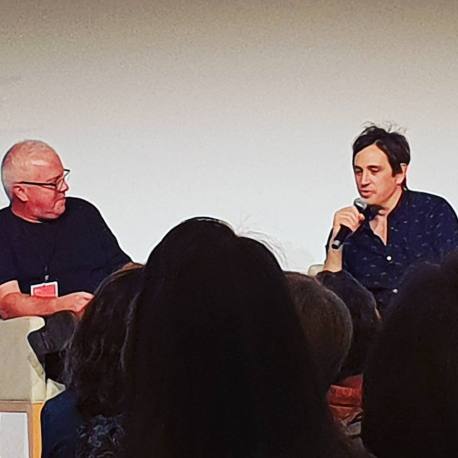 Trent is a true believer in the power of story, to empower and transform.  He felt vulnerable, and some weakness in sharing his story with us all.  But at the same time felt an obligation to share deeply as many of his interviewees have done over the years.  The reason for his feeling of weakness was that in some ways he drew strength in keeping the secrets of his life like a genie in a bottle, something gold, which has made him who is but which has more power in being secret.

But that feeling has been counteracted by his feeling for the ‘theatre of Brackenridge,’ and his concern for people born into communities like that who are in households, were there is lots of love, but also lots of dysfunction, and a feeling of hopelessness can creep in.

Looking back, Trent sees the hardships of his life as the ‘gold’ and admires his mother and brothers for who they were, are and who they have become.  He spoke passionately about how children need to have that relationship with their mothers, even in families where there is dyfunction, don’t disconnect them if you can, but let them heal, flood them with love. 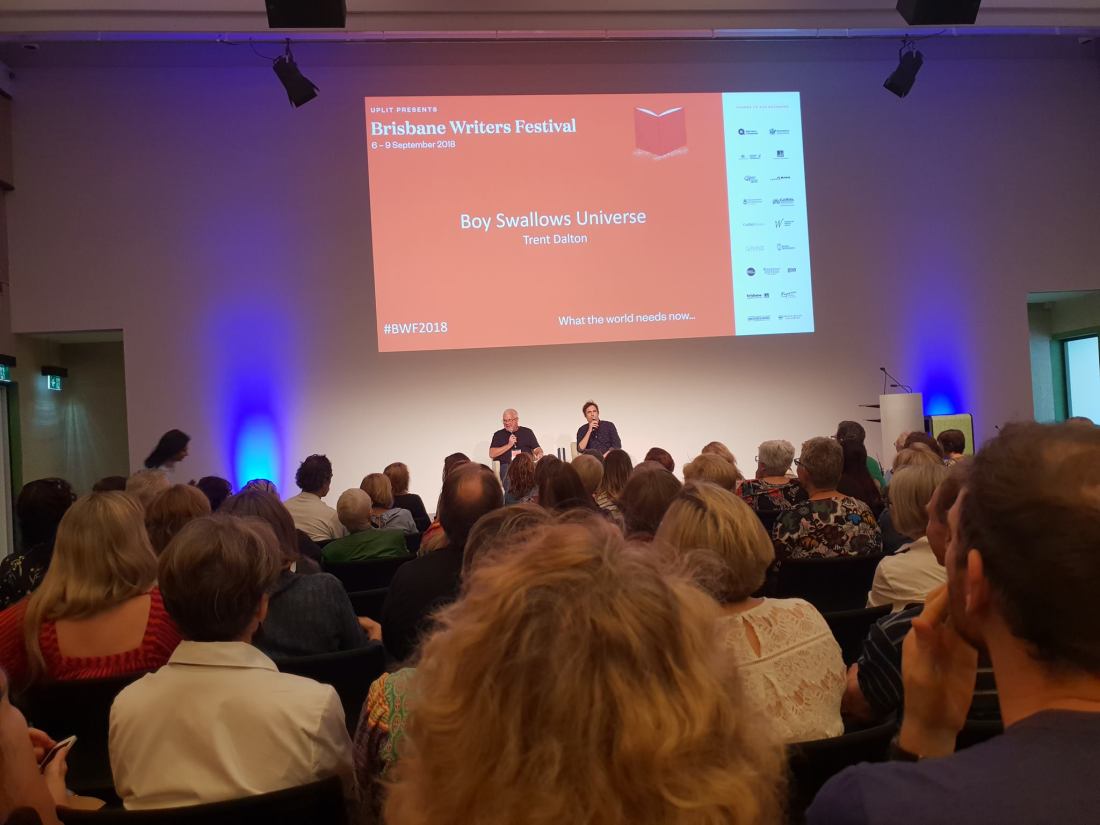 Matthew Condon’s interviewing of Trent was masterful.  Trent’s admiration and respect for Matthew was lovely to witness, and both clearly have a passion for Queensland, and specifically Brisbane stories.  Matthew has called Trent the new Tim Winton,  who has written something equal to Cloud Street.  Now that is brilliant praise.

There were many more stories in Trent’s wonderful and generous sharing with the audience, but I think it best if you go to hear him speak if you ever can, as I can’t really completely capture the humility, humour, warmth, and generosity of his words, and the way in which he emanated love for the audience.  And you know what the audience gave him back that love. ‘Don’t feel weakened by sharing so much, we appreciate it.’ said one person.

A huge queue lined up to have him sign books. Was it 200 people, or more I can’t be sure.  The line snaked around so people needing to travel elsewhere could pass through.  I was right at the back of that queue with a photographer from Toowoomba, and a once journalist, author, now working for university Queensland lady.   We chatted as we waited, and Dave, the photographer of Toowoomba took pictures of me with Trent, getting my book signed for me. 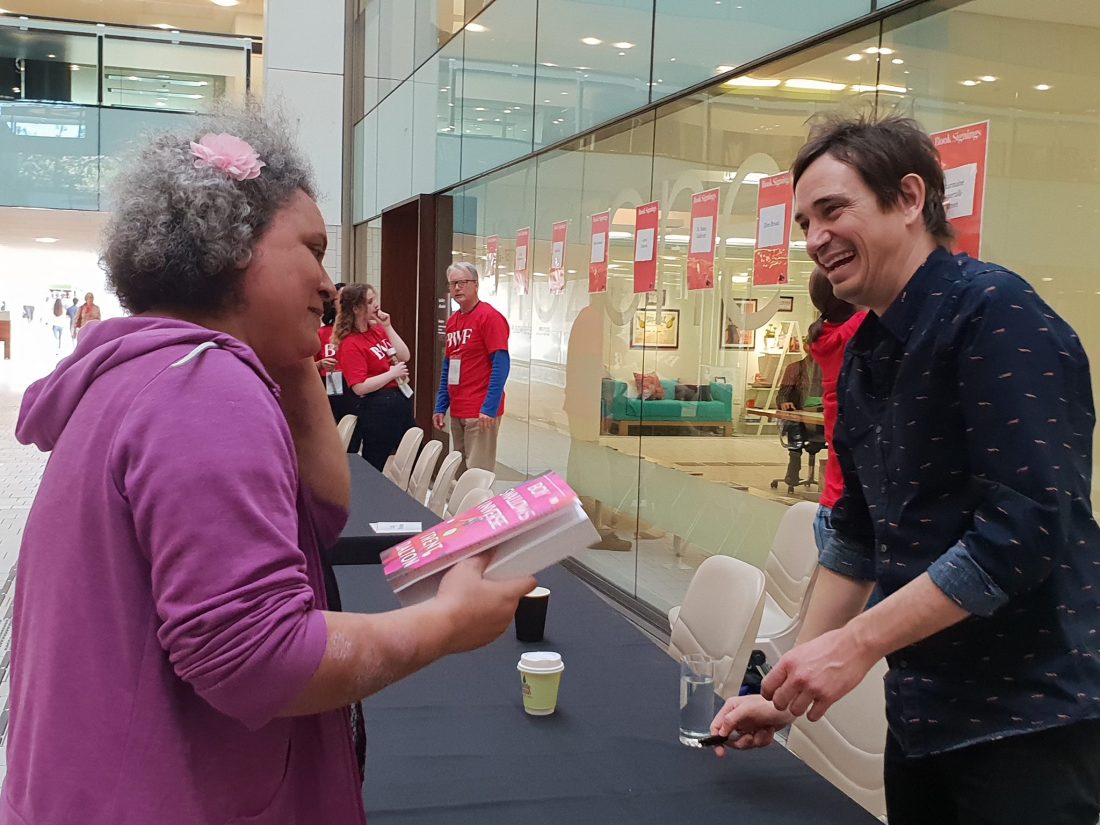 Trent thanked all of the people who lined up to have their books signed, and was warm, kind and apologetic we had to wait so long.

I told him I had someone I was going to have borrow the book from me, that would really benefit from it.

When thinking about why this talk affected me so much, I thought back to my time raised in housing commission areas in Tasmania, my brother who died at thirty after going off the rails, and my whole life journey.  I thought about Trent and I could see a place for my own writing in the Australian landscape of fiction. My dream to be an Australian Maya Angelou is not beyond reach; it is a matter of digging deep, and continuing to work on the craft.

It is about being passionate about social justice and what you want to say.

The next morning I went to my inbox on email, and found out that I am a finalist in a short story competition, and inspired by Trent, who said he wrote from 8-10 pm every night to finish his book, I have decided to devote three hours daily to writing, free from all the other things in life.

Maybe just maybe I can be like a Trent Dalton, writing the theatre of East Devonport, and Rocherlea, and of the racism that migrants in this country encountered in the early post white Australia policies.  And maybe, just maybe I can capture that astounding love of my parents, that gave me strength to get a university education and build a family that is a fortress of well being.

Thanks Trent, the world needs more writers like  you.

(Thanks Dave from Toowoomba, for the pictures of me getting my book signed!)