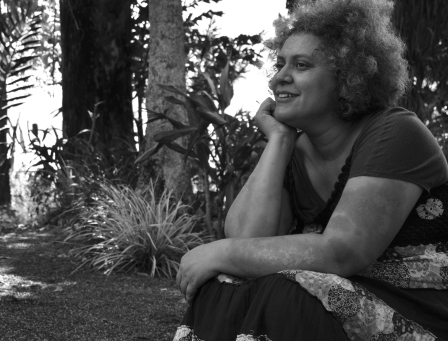 Her writing has been described as heartfelt, having a strong sense of place and a musical/ poetic tone.

She seriously began her poetry trek at the Tasmanian poetry festival at the age of fifteen and was touched to be invited back there to perform her poetry at that same festival ten years later.  She is listed in the Austlit database.

The highlight of her blogging career so far has been guest blogging for ABC Open for 6 months on cyclone Yasi recovery in the Cassowary Coast.  You can find her featured in the Aftermath Project.  She was an ABC Open contributor, in all genres and sometimes pops back to do a guest post.

She began photography in 2005, but was especially inspired by moving to North Queensland to pursue it more seriously.  The highlight of her photography efforts so far has been a recent highly commended photograph of caterpillars in a  competition to promote biodiversity and eradicate Stamp Ants, and the acceptance of several works to an anthology of Queensland Writing.  In 2013 she exhibited with Sophie Sam and Lima Robinson, on the theme of ‘Without Words’, using photography to convey ideas about heritage, solace of nature, and culture.  This exhibition was held at Malanbarra Midja Women’s Health and Housing.

During 2012 she undertook some video and photography assignments for the Queensland Music Festival, Far North Queensland Volunteers, and a local dance instructor.

June has both photography and writing featured in several Queensland Anthologies.

In November 2013 she published After Yasi, finding the Smile Within.

She creates works focused on peace, equality of men and women, people’s passion for art and life, and other concepts close to her heart, believing we can express our values in art in a way that is not didactic but attractive to the human heart.

She has just relocated to Brisbane and is adapting to city life.

You can contact her via this facebook public page or leave a message here and she will get back to you.

She has recently joined the photography team at nineteen months and begun posting biographies to Baha’i Chronicles.  Her first posting is on Fred Murray.

She is self publishing a book of her published and some unpublished work very soon so watch this space.  She is working on books for children and young adult readers.

27 thoughts on “About the Author”